When the Obama administration announced its Deferred Action program, young immigrants who stepped forward to participate were worried that there was some risk. If President Obama lost the election, their names would be known as possible candidates for deportation once the program expired.

Following Obama's reelection two weeks ago, those fears are fading fast. And more people are applying for the program, which is formally known as Deferred Action for Childhood Arrivals (DACA).

Shortly before the election, uncertainty about the program's continuation affected the number of applications. The Republican presidential candidate, Mitt Romney, had said that if he won the presidency, he would honor the two-year work visas and deportation deferrals that had already been granted. Romney also said he would not accept any new applications after he was inaugurated. This produced a chilling effect on applications to the program.

Now the number of applications is rising again with the possibility that Congress and the president can address the issue of comprehensive immigration reform that would include older undocumented people who do not meet the eligibility criteria for Deferred Action.

Nationally, as many as 1.7 million people may be eligible for the DACA program. So far (as of November 15), there have been nearly 309,000 applications. And over 53,000 have already been approved. 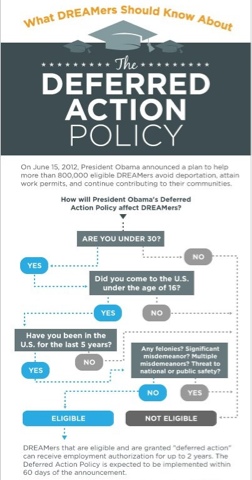